Adulting.  What a difficult thing.

I’d say they don’t tell you when you’re a kid that being a grown up is not all it’s cracked up to be, but they do.  They tell you repeatedly.  I remember many times my father telling me to slow down and enjoy my younger years.

I’m kind of glad I didn’t.  Life wants you poor and humiliated.  If I had listened I’d be in an absolutely desperate situation.  I didn’t have many cards to play besides opportunities that weren’t really opportunities.

That’s the essence of adulting I think sometimes.  There’s a game we all play where we pretend we played the right cards, or just didn’t play the right cards– that the cards we have to play affect the outcome of the game.

They often don’t.  Humans are communal, emotional creatures first — and emulate objective, logical beings as a result of emotional needs to feel that way arising out of communal, emotional reinforcements of culture during development and adulthood — while simultaneously being completely unaware of it.  If you want to beat that part of the game I’m pretty sure you’ve got to avoid playing it at all costs while appearing to play it.

In fact, most decisions that humans make are made before they decide on a reason for their decision:

As for adulting, tomorrow is it for sure.  Actually the next month is it.

Part of being an adult is pretending you don’t know sometimes.  But mostly, it’s putting on a suit and tie, shining your shoes, and doing the best with what you’re allowed to use.

As for the personal accountability aspect, there’s always influence.  Touchy topic because it can be confused with social engineering, which is slimy to me.

I see the sphere of influence of a person as having three surfaces:

Things in this context include your tools.  These are the things you use to get tasks done.  This is often something you have direct control over but sometimes is not.

Things includes your experiential base.  These are the issues you’ve seen before, the skills you have, the norms and values you’ve learned, and your general education and culture.  It includes the training related to your use of tools.

Things includes your environment.  An environment is a complex, composite concept.  It includes the people in that environment as well as their individual experiential bases and decisions.

I think that’s pretty well covered by people who have thought things out more than I have, but what I never see mentioned is that in the three surfaces of influence in a sphere is another dynamic called time.

Things move from a ‘direct control’ surface to an ‘influence-only’ surface all the time or from a “can’t influence” surface to a “direct control” and over and back.  The planes of these surfaces are not necessarily fixed.

For a more complex observation, while I tend to overuse the boyd loop as I find organic information processing cycles to be fascinating, I think it demonstrates how studied the concept of influence of typically uninfluenceable things is even by our military:

So, when someone references the serenity prayer to you make you feel better about having sucked at adulting, like so: 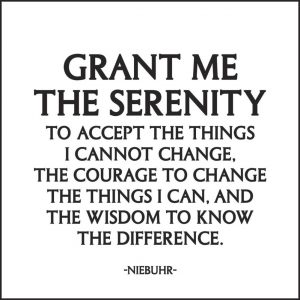 It’s comforting.  But you simply failed to influence your environment.  You have failed at adulting.

It happens to the best of us.

That said, some things would require an unrealistic amount of effort to influence.

As to coping with failure, I think Batman is the best metaphor.

If Bruce Wayne weren’t still useful to Batman he would just be Batman all the time.  Just because Batman’s life as Bruce Wayne is a lie doesn’t mean that Bruce Wayne wasn’t a useful character in the story — in fact it brought alot of balance to the Batman character — Bruce was the psychological success factor balancing Batman’s degrading psychological state.

In fact you could say that Bruce wasn’t really anything negative at all, he was just socially or emotionally discontiguous to the dominant persona telling the story.